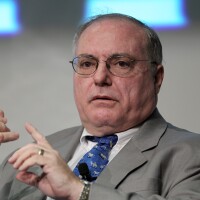 George Friedlander is widely recognized as a leader in the municipal bond marketplace. He is frequently quoted in the financial press on his ideas related to trends and investment patterns in the municipal bond market. Prior to joining Court Street Group, he was employed by� Citigroup and its predecessor firms for 41 years.� He has a BS in Math from the State University at Stony Brook and an MBA with Distinction in Finance from Pace University. Mr. Friedlander� has perennially been ranked within the top three� in municipal strategy in various investor surveys. More recently, he has adjusted his focus to policy analysis within the muni market, as well as the implications of accelerating technological change for state and local governments. Mr. Friedlander has further been recognized with awards from SIFMA and its predecessor firms, the Bond Market Association and the Public Securities Association, and from the National Federation of Municipal Analysts. He was voted the National Federation’s Analyst of the Year in 1989, and received the Chairman’s Contribution Award of the Bond Market Association in 1997. In 2011 Mr. Friedlander received the Lifetime Achievement Award in a poll of institutional investors by Smith's Research and Gradings. �He is currently actively working with state and local public interest groups on ways to respond to potential threats to the tax-exempt status of municipal bonds.